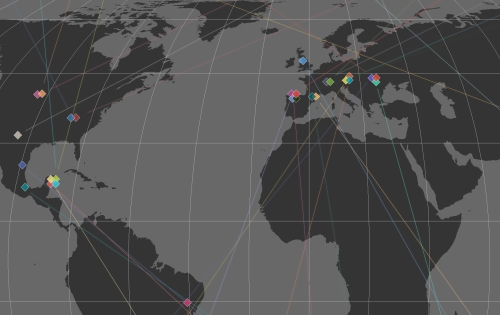 Did you see a map of the localization of the longest caves in the world? Me neither, that’s where the new idea was born to collect and try to visualize these magnificent natural creations. Nevertheless, it wasn’t easy.

The hardest part was to obtain the exact localization of the first thirty longest caves. Not every name is easily found with coordinates and searching for it through scientific articles is not a fast process.

During the searching process, I have discovered that some of the caves are not even listed in OpenStreetMap. Thus, I decided to repair such oversight and created some, new OSM features.

The first phase of the work was to prepare a background map in ArcGIS. This included: adjusting the projection to Equal Earth, adding shapefiles from Natural Earth, choosing colors, making proper grids. I’ve manually geocoded also cave points (POIs) in ArcMap and tried to visualize them but it was strangely cutting the edges of it after exporting to PNG format.

After all, I’ve decided to switch mapping to Photoshop where I manually draw points and the rest of the graphics besides flags that were taken from Flat Icons.

Longest Caves on Earth in Table

Cartographic Visualisation On a Map

This work is licensed under a Creative Commons Attribution 4.0 International License.